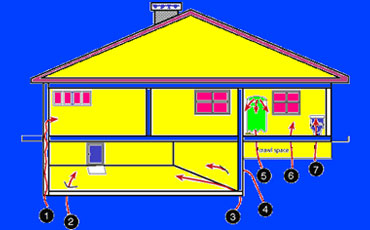 Radon is a colorless and odorless radioactive vapor derived from the natural chemical decay of uranium in the soil, bedrock, and water all over the United States. In fact, it is so common that roughly 0.4 pCi/L is normally found in outdoor air. The concern with radon however, is with its chemical activity coupled with its normal physical state. With the atomic symbol "Rn", Radon can be found at period six, group VIIIA on the periodic table of chemical elements. This defines radon as a slightly heavy vapor under normal conditions (temperature, pressure, and volume).

Because radon exists in the elemental state (a very small molecule), it is able to readily penetrate porous and semi-porous barriers, such as soil, gravel, rock, cement, wood, and composite structures. And because radon exists in a gaseous (vapor) physical state, it tends to naturally evacuate from the higher density soil and bedrock into the lower density atmosphere.

When a structure is built in, or on top of the soil, it acts as a sump well so that radon can seep inside, taking the path of least resistance to escape the soil. The major concern is two fold. First, because radon is a heavier gas, it tends to accumulate at lower levels in the home rather than immediately exiting through the attic and roof structure. Secondly, it is assumed that the resident will spend a disproportionate amount of his/her life in the home. Some homes, therefore effectively can become a holding tanks, accumulating higher concentrations of radon in the room air, though the stacking is not additive as radon is subject to radioactive decay.In fact, it is this decay that is the cause for concern. As radon chemically decays, it releases sub-atomic particles at a very high velocity, much like those of an X-ray, although they are not focused into a beam like an X-ray. These particles are capable of penetrating our bodies at the cellular level, knocking out, and damaging segments of our DNA, which, in turn MAY lead to cancer. We are subjected to this bombardment of particles in every moment of our lives by many different sources. But the tissue in the lungs seems to be more vulnerable to this insult when air containing high concentrations of radon is breathed over a long period of time.

While all scientists agree that this is harmful, the exact risks are widely debated, partially due to the widespread prevalence of radon, and partially because it is nearly impossible to distinguish the exact mechanism for genetic damage (cancer risks are based upon exposure statistics).

The EPA and Surgeon General, however, have the most widely accepted guidelines for radon and its mitigation. Although the U.S. Congress has established a long term goal of reducing indoor radon levels to equal that of outdoor levels, it is not yet technologically achievable and indoor values average at about 1.3 pCi/L (picocuries per liter), three times that of outdoor concentrations. It is recommended that a mitigation system be installed if tests reveal levels higher than 4.0 pCi/L or 0.02 WL (working level).

Mitigation systems are, more often than not, simple and relatively inexpensive to implement. Gateway also recommends that you individually assess your family's risk factors. For example, is the basement finished or do you plan on finishing it? Are you a smoker or are you exposed to any other airborne carcinogens (and if so, at what frequency)? Is there a family history of lung or other related cancers?

Most pre-sale inspections offer radon testing at an additional fee, but these are short term tests and not necessarily indicative of your home's long term levels. Radon levels can and do vary from day to day, season to season, and year to year, and long term testing (longer than 90 days) is available. Also keep in mind that your purchase is an investment and as such, you must consider if the next buyer will be concerned with radon mitigation.